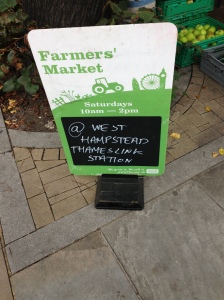 I say! A farmers’ market!

Jesus Christ on a bike. I’m turning into one of those smug-married, middle-class tw*ts that I used to despise so much. Hmm, maybe I shouldn’t be that surprised. After all, I am the boy that’s so Home Counties I thought the word ‘turd’ was spelled ‘terde’. I kid you not.

Anyhow, last weekend I sank to new middle-class lows. I found myself mooching around the Saturday morning farmers’ market in leafy West Hampstead. So there I was, a still-dusted-with-flour baguette stuffed under one arm, a copy of the Guardian under the other, chatting to a Starbucks-swilling yummy mummy about the virtues of sun-blushed baby plum tomatoes as I waited in line for some venison and leek sausages. I even bought some curly kale. I wouldn’t mind but I haven’t got the foggiest what curly kale is yet alone how to cook it.

Kale and other posh stuff

As if that wasn’t bad enough, the next day I could be seen swanning around that Mecca of middle-classness, Habitat. Reason being, I was on a mission for ‘objets d’art’. Since moving in to my new pad with Monsieur P, I’ve felt like we’ve not really put our stamp on the place. For weeks now, our home has felt a bit cold and unloved.

While I’m still in denial about my trip to Habitat, it did unearth an interesting dynamic between me and Monsieur P. When we first arrived in the store, he instructed me to only buy items in the front section of the shop. I couldn’t work out why browsing frontiers had been set but then the penny dropped. Dangling above our heads was a sign emblazoned with the message ‘25% Off’. I should have realised – Monsieur P is a bargain hunter extraordinaire. If there’s a deal to be had, he’ll sniff it out with that French hooter of his, trust me. 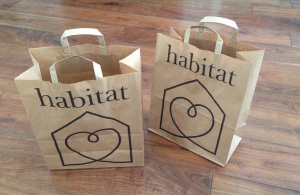 Suffice to say I ignored his directive and proceeded to pirouette around the shop, sweeping up as many over-priced vases as I could. It wasn’t long before I had a shop assistant in tow, ferrying my selections back to the cash register. At this point, Monsieur P realised he was fighting a losing battle and so retired to the comfort of a showroom sofa to play Candy Crush. Now, despite being a Frenchman, my fella isn’t the most artistic or creative of souls – he’s more de Gaulle than Gaultier – and so was happy to defer the interior design choices to me.

After I’d gone around the ground floor like a carp gulping in, well, just about everything, I figured it was time to ascend the grand staircase up to Bathrooms & Bedrooms. I suggested to Monsieur P that he may wish to decamp to one of the cushion-plumped beds on the first floor while I devoured the next wave of goods. He graciously declined and instead suggested that I send him a photo of anything ‘expensive’ to his phone for verification purposes. This irked me greatly so I proceeded to send him a picture of a loo brush.

Fast forward to Monday back in the office. I recalled my middle-class weekend to one of my colleagues who was aghast at just how middle England I’d become. “I know exactly what you need”, she said, and proceeded to frog-march me to her car. Before I knew it we had pulled up in front of a shop I never even knew existed – Matalan. In case you’ve never been to one, it’s the homeware equivalent of Primark. To say I went wild in the aisles is an understatement. For the same price as two Habitat vases, I had kitted out my flat with more objets d’art than I knew what to do with.

Me being me, though, I transferred said objets from my cheap and nasty Matalan carriers into, yes, you’ve guessed it, Habitat bags. I mean, what would the yummy mummies of West Hampstead say? As the old adage goes, you can take the boy out of the Home Counties, but you can’t take the Home Counties out of the boy.